from one junkie to another!

“You have nothing to add to this conversation.”

This was the second sentence Kenneth Goldsmith ever said to me. It was the first day of his workshop, Uncreative Writing, which I chose because the description said absolutely nothing about “performance.” I was, along with everyone else who had been on campus since June 8th, suffering from an advanced case of week-four delirium exacerbated by prolonged exposure to greatness, anticipated loneliness (which I knew would set in the moment I bumped my suitcase over the threshold of my room at Snow Lion), and heat stroke. Perhaps that explains why I had, moments before Kenny G shot me down, been under the delusion that I had something relevant to say. In the wake of my public castigation, a few of my classmates paused in their over-stimulated squirming to offer an exhalation of commiseration, feeling for me in my lapse of judgment. Mr. Goldsmith, however, barreled ahead, either because I’ve perfected a talent for adopting an air of calm even when mortally wounded or because he simply didn’t give a good damn that one of his students was down and bleeding. Betting on the latter, I spent the last two hours of class in stubborn silence, alternately trying to decide if I should walk out or stay and see what other words of wisdom Goldsmith might offer.

Later that afternoon, when friend and SWP assistant Julie Kazimer asked how the workshop had gone, I came embarrassingly close to tears. In lieu of bursting into outraged weeping, I related the bruising my ego had undergone, concluding, in a very un-Annie Maier-like tone, “I think Kenneth Goldsmith might be an asshole.” 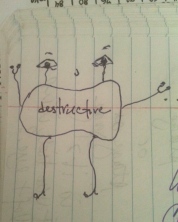 Julie asked if I wanted to switch to another workshop. Blame the heat, or perhaps my Catholic school upbringing—Yes, ma’am, Sister Vicious, I would like to come up to the front of the room so you can whack me on the head and call me a moron—but I really couldn’t decide. On one hand, I questioned the wisdom of taking writerly advice, otherwise known, in this instance at least, as an intellectual beating, from a man wearing a black hat, wide-striped shirt, and blue seersucker pants rolled several inches above sockless brown oxfords. On the the other hand, I suspected that such an amazing outfit would not appeal to, or even occur to, a person without some level of genius. Had it been week two, when I was still fresh, just hitting my stride, feeling confident and lively, the choice would have been easy. But it was week four and all I wanted was to go get a tattoo and drink my exhaustion into remission.

“Can I decide tomorrow?”

Yes, of course I could. I was at Naropa.

This then is the first moral of my story: If at first life slaps you to the ground, forget conventional wisdom, which would say to heave yourself upright and jump back into the fray, but forget too the overwhelming desire to run like hell and never return. Instead, lay there a moment. Think about the slap. How did it feel? What imprint did it leave? Was it even a slap? Look up at the sky. What are the clouds doing? Are they blue, gray, white? Is the sun shining, or does a light rain splash your unblinking eyes?

Once you’ve run through this or a similar list, then pick yourself up. Check for broken bones and/or blood. Do you need a bandage, stitches, a hug? Reassess. Only then, ask yourself, “What might I gain from diving back in?” Then go for it.

On Tuesday morning I was back in Sycamore, listening to Goldsmith expound on the ignorance of writers. Ah, I thought, maybe I’m not the first idiot he’s ever met.

Turns out, Goldsmith has met many idiots in his time, mostly in the form of students but also in the form of causes célèbres (“Success is for Hollywood.”), writers who waste time thinking about readers (“I’m not interested in a reader, I’m interested in a thinker.”), and artists who expect art to make sense in a linear, well ordered way (“Art does not play by the rules”). Indeed, such people form the basis of Goldsmith’s teaching method.

“This is stupid,” he repeatedly tells us in reference to various ideas, projects and assignments. “DON’T BE STUPID.”

Because I respect the mission, I forgive the delivery, and so shut off my brain—the anxiety ridden, under-confident part that blocks out so much of life—and listen. And in listening, I find myself captivated. Goldsmith isn’t thoughtless or brutal, as I believed. He doesn’t set out to piss off students. He sets out to make them square their shoulders and refuse to be intimidated. Given the benefit of a day or two, one comes to appreciate his brusqueness. Not because one likes being dismissed with the wave of even an articulate hand, but because one gets, perhaps for the first time, what all artists must accept in order to survive—time is short. Every one of Goldsmith’s indictments are delivered as reminders: given an ounce of opportunity, life will poke an extra-wide needle in your veins and suck out every gram of initiative, regurgitating your remains in slag heap of complacency and boredom. In between withering looks and repeated shouts of, “NO! Wrong answer!” he inculcates: Read this. Look up that. Check out this writer, this artist, this project. Pay attention. Share ideas. Do it all, he tells us, but do it with intention.

Each morning, we received the same exact assignment: Day 1: Take 3-5 pages of any piece of writing and replicate it. Day 2: Do it again. Day 3: Again. Day 4: And again. Sounds horrible, no? But it wasn’t. I can’t, in any reasonable amount of space, tell you why. The most surprising aspect of this assignment, though, was the amazing diversity of work it produced. By repeating the same exercise over and over, I learned to pay attention to every detail, every choice. “Chance operations,” Goldsmith told us, “remove the ego and create poems of choice.” However insignificant they may seem, each of those choices say “something about you as well as your source material.”

One Response to “2012 SWP Goodness (and not so goodness): Week Four”